Up to this point, it has been a very uneventful severe weather season for most of Iowa. All of the action had been bottled up farther south and west, on the plains. Thus, there aren't very many reports for the season. I am now working on adding the few chases I have been on.

On Sunday, June 7th, while watching the main show of the day online farther southwest, a supercell formed near Atlantic, IA and rode a boundary in central Iowa along I-80 towards Des Moines. This storm produced a brief tornado near Adair, IA and a couple just west and northwest of Des Moines.

I left Ames with a friend for an intercept near Des Moines. I did not like the idea of a city intercept, but I had to work with what I was being presented. We took I-35 south to I-80 west as the storm approached. We heard of the reported tornado west of Des Moines just a little while earlier, and pulled off of I-80 on the north side of Des Moines just ahead of the storm.

Here is a picture looking northwest as the tornado sirens were going off. This is probably within 5-10 minutes of the last reported tornado of the storm. You can see a wall cloud in the distance in the center of the picture. The storm was a high-precipitation beast, and it was hard to get good pictures. Even harder was trying to get in a good position to see anything noteworthy anyways. 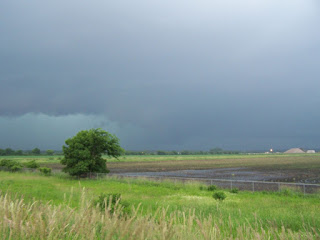 Shortly after we were pounded with heavy rain and had to find an exit on the interstate to turn around on. City chasing sucks, being on an interstate is even worse (especially going the wrong way...). We got ahead of the storm eventually and followed it northeast. The storm was still tornado warned at this time. We couldn't see much, but the storm was beautiful for a HP. 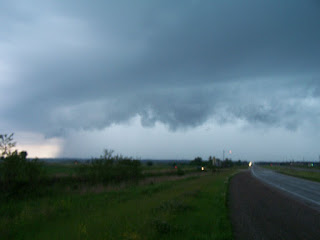 Farther east, the storm is now just severe warned and we decided to call it a night. 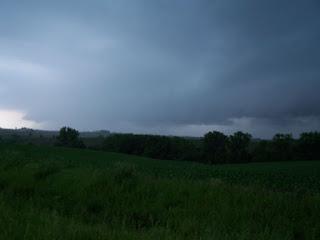 These sunset shots were taken after we passed the storm on I-80 and we found an exit. Very cool! 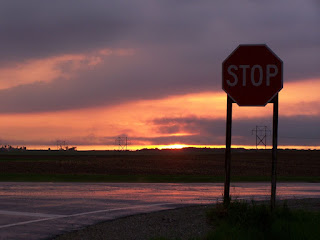 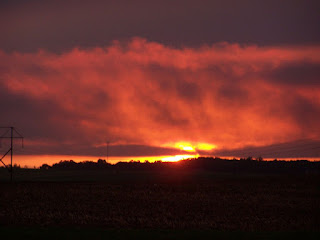 Overall it was a decent chase for as late as we left. I should have left sooner, but I wasn't sure how it would hold up since conditions weren't as favorable. It rode the boundary and did what it could. This was also my buddy's first storm chase, and he had a good time!
Posted by cstrunk at 9:10 PM