I apologize to anyone who has been waiting for me to post updates or see what's been happening lately.

Here is my account from the June 21st, 2009 Grundy Center to Waterloo chase -- My best chase to date!

I was heading back to Ames from southwest Iowa. I knew there was a potential for activity in central/northern Iowa that afternoon. As I approached Des Moines, I noticed storms going up to the north and shortly afterwords, tornado warnings were being issued. I made the decision to head north and try to catch the storms.

Here is a picture of the storm as I was heading north on US65 somewhere near Zearing, IA. 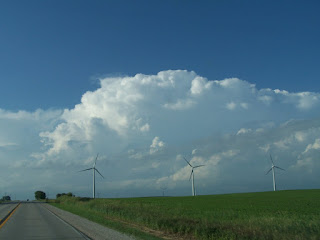 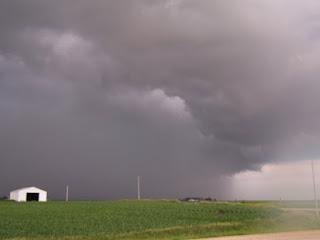 I continue driving east and ended up making it to Grundy Center. I was in great position to view the storm as I saw on the west side of town and had a great view to the west, northwest, and north. The storm tried very hard to wrap up here. I got out of my air-conditioned truck to take some pictures, and was reminded of a very important storm chasing lesson: bringing your cold camera outside into hot, humid air will cause your lens to fog up! D'oh! Thus, many of my pictures at this location are very foggy. Stupid me. One must always remember to turn down or turn off the A/C as you are approaching a storm you want to photograph!

Here is a picture of me on the west side of Grundy Center looking at the beautiful storm wrapping up to my northwest. You can see the clear slot and wrap-around precipitation very easily. 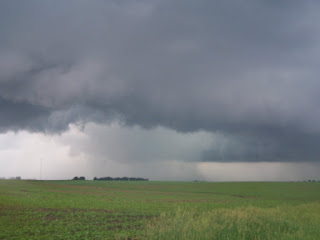 Things began to get a little more interesting as the storm continued to wrap-up. In this picture (starting to get foggy), you can see a funnel cloud forming in the center of the picture. 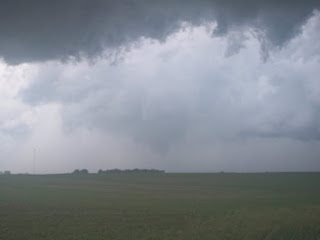 Here is another foggy picture as I tried to zoom in on the funnel cloud. There was a lot of rotation and I was sure that I was going to see a nice tornado form. It came really close, but I could never see condensation all the way to the ground, so I couldn't tell if it actually touched down or not. I don't remember seeing any reports of an actually touchdown here. But man, it was close! 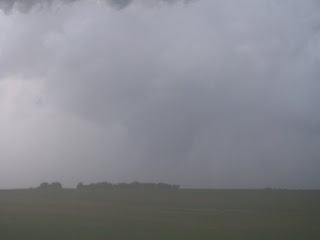 The storm was moving to the east, and precipitation was starting to close in, and my view was becoming blocked. It was time to move. I headed east through town. The highway began to turn a bit farther south than I wanted to see, so I had to pick a gravel road to get back to the north.

I don't have a GPS or any fancy navigating equipment, so I have to be careful when making navigational decisions close to a dangerous storm. One wrong move could end up positioning me between a wall of hail/rain to the south/west, and the area of circulation (bad place to be under!) to the north. Thankfully in most parts of the state of Iowa, we are lucky to have a grid road system, so there are usually east/west and north/south roads every mile.

I chose a gravel road and blasted to the north. The storm was quickly approaching from the west, with the hook threatening to overtake me. There was no road at the first mile. I just barely made it to an intersection at the next mile with enough time to take a picture of the precipitation and area of circulation, which were both under a mile away. 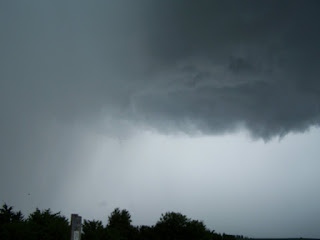 I zig-zagged my way through gravel roads staying ahead of the storm. While the storm was still clearly rotation, it looked less-ominous than it did near Grundy Center. It finally began to look better which gave me renewed hope that it might produce. Here is a picture looking to the northwest at a nice wall-cloud. 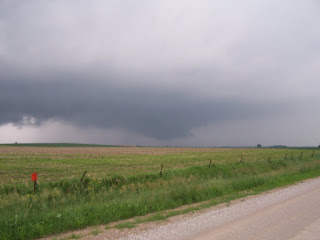 A little bit later, I made it to the southwestern edge of Waterloo. The storm was looking downright nasty again to the north/northwest. 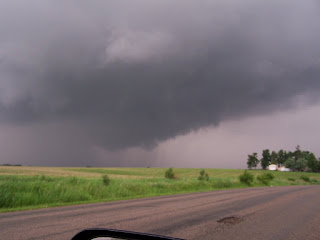 On the other hand, with the sun beginning to set, there were some beautiful views off to the west. 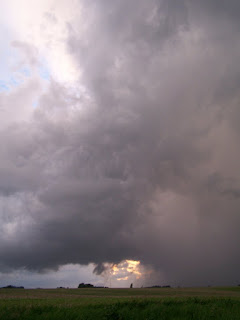 The wall cloud was rapidly rotating at reminded me of the scene near Grundy Center earlier. I had a bad feeling that there would be a tornado ripping through Waterloo. 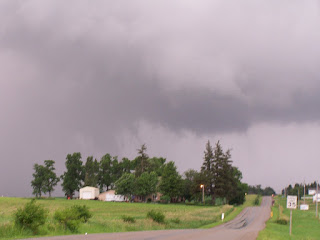 THANKFULLY, the storm lost steam after this, and I never heard of any reports of a tornado here. I tried to find a way to follow it to the east for a bit before it got dark, but the road network through town and around the south side was a big pain, and I called it quits for the day.

All in all, it was an awesome solo chase. I got to see a very beautiful storm come very close to producing a tornado several times. The beautiful views that this storm gave more than made up for not seeing a tornado today.

I wished I would have left home a couple of hours earlier so I could have been on the storm from birth. The storm did produce several weak tornadoes before I was able to catch up with it. I don't believe any touched down after I caught up with it.

Again, sorry for not posting this sooner! It has been a nasty winter around here, and I'll try to post some of my various blizzard/winter pictures from Iowa soon.
Posted by cstrunk at 2:40 PM