I finally graduated school! There has not been any interesting weather occurring in Iowa when I've had any time to chase. Now that I've finished school, I have a couple of weeks before I move to Texas and start my new job!

I teamed up with Scott Bell and chased the extremely hyped severe weather setup in SE Kansas and Oklahoma. We left Maryville, MO before 1 PM, after Scott could get away from work. It is always best to get to your target area well before storm initiation, but it doesn't always work out that way.

We were targeting Wichita, KS. We got on the interstate and headed southwest. Storms began to blow up in SW and SC Kansas, and eventually NW Oklahoma. And the race was on, with 45-55 kt storm motions to the NE.

We decided that we needed to target the supercell in Oklahoma that was going to cross into Kansas, as in our position was about our only option. We could have went west into Wichita to chase a supercell west of town, but decided that chasing in a metro area would be a bad idea. That storm ended up being choked off by other convection before we could have ever been close. 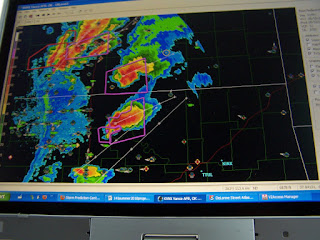 Our storm looked fantastic on radar (well, actually all three supercells in SC Kansas through NW Oklahoma looked amazing at one time or another). As we approached the storm and got into position near Longton, KS on the southeast side of it, it died. In the picture above, our location is represented by the yellow dot with a circle around it, to the northeast of the storms. You can tell that our storm just to the southwest of us is started to die. It was ingesting cool air as we were on the cool side of the warm front. We were too late. We couldn't even see the storm visually due to low clouds blanketing the sky.

We headed back north and got munched by a line of severe thunderstorms that had fired along the dryline. Nothing much to note, except for heavy rain. We did notice some of the most interesting feeder bands I've ever seen that were feeding the line of storms. The clouds were literally forming from condensation rising off of the ground, right out of the trees. If you enlarge the picture below, you can see it lifting off of the trees down the hill. These clouds were then sweeping towards the severe storms to our west, feeding them. It was very creepy. 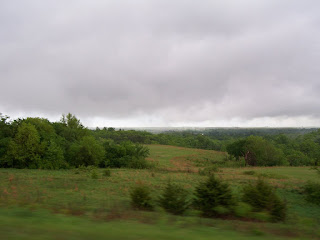 Later we sat northeast of Emporia, KS and watched a linear severe warned storm. It had some cool structure (best of the day by far) and was a nice treat to an otherwise disappointing chase. 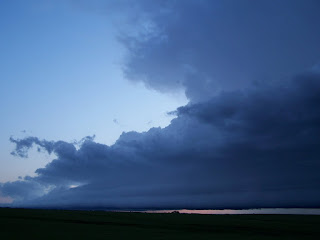