Another disappointing chase. I started the day in St. Joseph, watching the progress of a warm front in Kansas and southern Missouri as it moved northward. The front stalled out along I-70 and the only clearing that was taking place was in southern Kansas.

I made my way towards Lawrence, Kansas. I stopped for data just outside of town. A tornado watch was issued for central and southern Kansas. It became obvious that eastern Kansas was not going to do anything with all of the crap-vection and clouds in the area, limiting instability along the warm front.

I teamed up with a fellow storm chaser from Topeka and decided to head south and west. We met up at a gas station along I-35 and Hwy 75. There were tornado warnings on a couple of supercells that had formed in south central/central Kansas. It was a little surprising to me that these storms got their act together, after initially looking like linear, outflowish junk. But they did, and we made a plan to head west of Emporia and try to get close to the line of storms.

The storms looked pretty good for a while, but as we got closer to Emporia, they started to lose their supercellular characteristics and turned back into linear junk. Just great. We had come this far, so we decided to continue and just try to see whatever we could. We stopped in Florence just ahead of the line of storms. Nothing looked good, and we didn't even have a very clear view of the storms. We waited for a while and finally it looked like the end of the line segment to our west was growing in strength and would head directly for town. It wouldn't have much of a tornadic threat at all, but maybe it would be interesting to look at, we thought.

We headed a few miles south of town and pulled off on the top of hill (in the Flint Hills, if you are on the top of a hill you can see forever). The storm was producing outflow clouds that I have seen referenced as a "whale's mouth" because of the way they slope back upwards on the backside of them. There was a decent hail core on the southern end of the line and it skirted past us to the north. 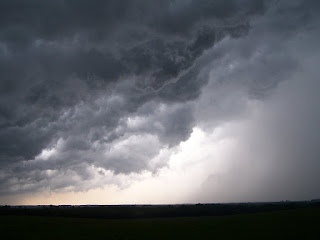 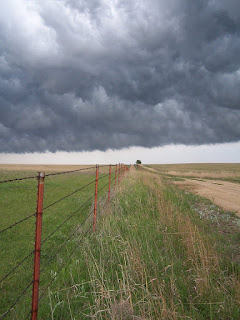 We took the opportunity to take a few scenic pictures and headed back to Florence. We saw a report of 1" hail from the sheriff in town, and he was right. There was a pretty good amount of 1" hailstones. I'm glad we decided to head south since we were in my truck... All in all, another disappointing Kansas chase this week where being out of position ruined any opportunity of seeing a nice supercell storm. It looks like my chasing opportunities will be slim until I moved to east Texas in a couple of weeks. Not sure how many opportunities I will have after that... stay tuned!

I'd like to thank my chase partner, Zach, for joining up with me and providing radar/data and Mike Johnston for providing nowcast support.
Posted by cstrunk at 1:38 PM