Wow, what an evening. I chased with a friend of mine, who had never been chasing before. We left Des Moines around 2:30 PM and headed west to Avoca, IA. Stopped for some data at the Pilot truck stop. Nothing was happening yet so we killed some time and drove around a state park a little ways to the north. Then we went to Harlan, IA and found another WIFI hotspot and got more data. By this time the storm of the day had initiated in Nebraska. I waited around for just a little while to see if anything looked like it would develop farther south, but finally made the decision to intercept. We went north to Denison, IA, but could not find any WIFI quickly, but heard the thunderstorm warning and then the first tornado warning for Monona county to our northwest and headed northwest to Charter Oak, IA. By this time the beautiful mesocyclone became obviously apparent. We took some county roads north and parked on top of a hill somewhere west of of Ricketts, IA. 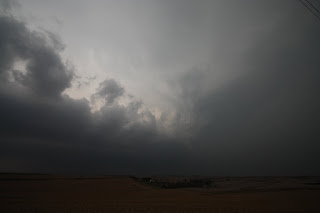 As the storm approached we began to realize that there was a tornado tucked back in there, and I was able to capture a few pictures from a distance of the Mapleton tornado. We could see the lowering and the dusty appearance it had underneath. We were some distance from it - you can see how wide the circulation was on the ground. The inflow was insane! 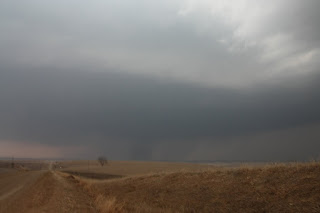 We followed the storm northeast to near Odebolt. It was dark by this time, but lightning was amazing and gave us pretty good views of several wall clouds. We saw a finger-like tornado drop down straight north of us. I'm not sure exactly where or when, but we also witnessed another touchdown sometime around this one. I think it was from another mesocyclone just to the east of this tornado. 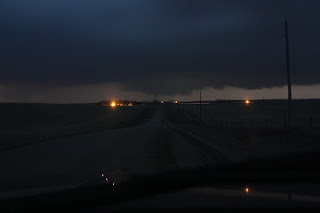 We kept on northeast and made it to Highway 20. We stopped on some county roads which were apparently south of Fonda to take some more pictures of the mesocyclone which was a bit more distant now. We could see the wind farm lights flashing to the north and northeast. While watching the base, we witnessed another finger-like tornado touch down. 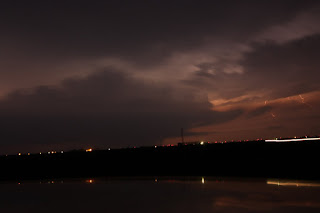 We decided to call it a night shortly after this and headed back to Des Moines.

Lessons learned: I love chasing in areas with a great road network, with the usual mile x mile section county roads. It makes chasing possible without too many fancy gadgets. We never used radar after we got on the storm - ALTHOUGH it would have been nice and have allowed us to get closer and better views. I try not to get too close. I really need to work on learning how to use my camera, LOL. And I really need to get a tripod, although with the crazy inflow this storm had, it might not have helped a whole lot. It's time to invest in a video camera as well. It would have made trying to get night shots of the tornadoes a lot easier.

Great chase day! Caught 4 tornadoes (confirmed). Thoughts and prayers go out to those affected by the storms tonight.
Posted by cstrunk at 1:48 AM