Friday afternoon, my friend and I left Ames at about 3 PM and headed north on I-35 towards Mason City, IA. We stopped for data at the rest stop by Dows, IA. We continued north on the interstate until a few miles south of Mason City. We headed east to get a better view of the storms building to our north and west. 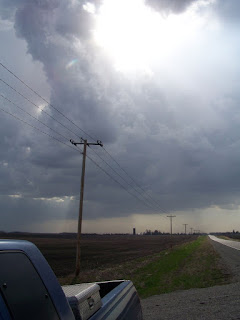 We were watching a particular cell to our west that had a really well defined rain/hail shaft and there was some nice lightning around. We never ventured into the storm to sample the hail (quarter sized hail was reported). 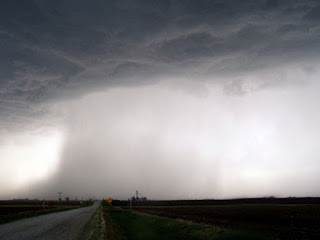 The storm became kind of messy and based on the advice of our nowcaster (Thanks, Bill Schintler!) we dropped south towards Hampton to view another severe warned cell. It was not as "impressive" as the first cell with similar structure. All of these storms were deprived of moisture and had very high bases, not good for tornadoes. After watching it for a bit, we decided to head back towards Ames and drove through more storms along the way, treated with moderate/heavy rain and some close lightning. 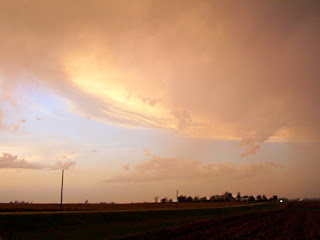 I really need to practice different lighting conditions with my camera more often. Not to mention upgrade my camera to something nicer with a bulb setting that I could use for lightning. We stopped near a wind farm by Zearing, IA hoping to get some lightning strikes with the windmills in the background, but the storm in the area was weakening and the strikes were too infrequent for my limited 16 second exposure time on my Kodak. I will return to that spot again sometime to try lighting with that background though!!

Fun chase to start the season, can't wait for the "real" storms to make their way farther north into Iowa later in the season so I can see something a little more worthwhile next time...
Posted by cstrunk at 6:31 PM