This was a chase that I tagged along with Scott Bell for. He was gracious enough to let me ride with him for the day. It is the only chase that I have been in where I have had access to the internet while on the road through a cell phone provider. He had a laptop with the internet and GPS set up while we were chasing. It really is nice to have these amenities available to you while chasing, but it doesn't mean you will make the right decisions and get on the best storm... however, it sure doesn't hurt!

We left St. Joseph, MO in the afternoon (where I was located at the time) and took the interstate towards Emporia, KS where we watched the storms build. We left the freeway as we planned an approach for this storm: 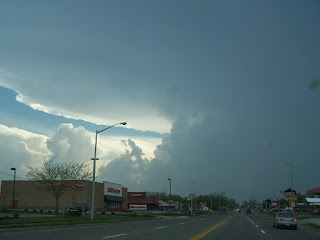 We made our way to the business end of the storm. It never could get it's act together, and this was our view of the updraft region: 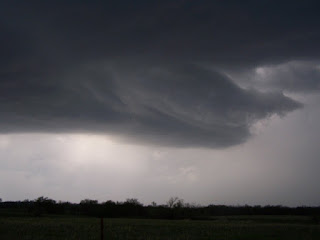 The storms were forming into line and we decided to follow them back home. Along the way, we approached a tornado warned cell and viewed this lowering as light was beginning to fade. I do not know if there was a tornado produced from this storm or not, but it sure looked mean! Here is a blurry picture that I took as we stopped to assess the situation: 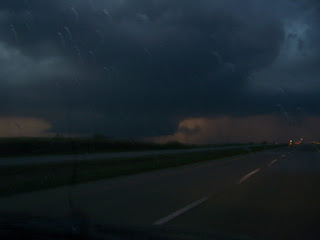 Again, for this chase I must give a big thanks to Scott Bell who let me tag along. It's too bad we didn't end up on a better storm, but that's how it goes when you are chasing! I still had a blast and hopefully I'll meet up with him again sometime in the future.
Posted by cstrunk at 3:01 AM