This was more of a "Hey, everyone, look at that!" chase, than anything. I was at my parents house near Shenandoah, IA at a get-together with some of our family friends. I had been checking the weather everyone now and then, between being outside and grilling, so I knew there was a threat for severe weather.

As the afternoon turned to evening, I watched a storm build to the southwest heading to the north. It ended up passing within a fairly close distance to our house. As we were in our garage outside eating dinner, we heard the tornado warning being issued for the storm over the radio. I ran around the house to get a better look, and sure enough there was a very large wall cloud 5-6 miles west of where we were.

I jumped in a vehicle with an older friend of mine who also enjoys chasing local storms and tried to get closer. The storm was moving pretty rapidly to the north, and we tried to keep up with it. I am not a professional photographer by any means (although I am improving!), so I was only able to grab a blurry picture of the wall cloud, but it shows up well enough! We chased the storm for about 20 miles and were able to catch the area of rotation, but never saw a tornado. By this time it was getting dark and we called it off.

We later learned of tornado touchdowns along the path of the wall cloud (that we did not observe). There was an EF1 tornado that had a path length of approximately 11 miles from a few miles north of Farragut, IA to near Imogene, IA. One of the farms to sustain damage was none other than that of my friend's parents, while my friend was still at my house eating dinner! They lost a grain bin, the roof to their machine shed, and some trees.

Here is my only decent picture of the wall cloud: 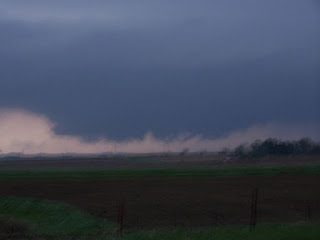 Later that night, heavy thunderstorms pounded southwest Iowa with heavy rain. Over the next couple of days, Shenandoah, IA suffered from some of the worst flooding it had seen in a while.

Here are a few pictures that I took by the edge of town: 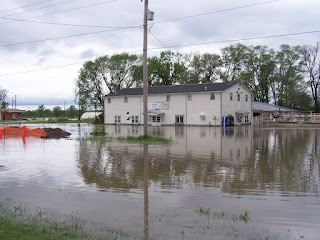 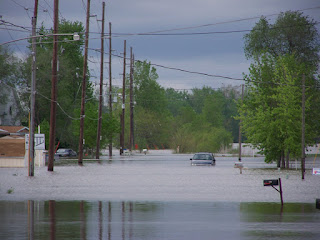 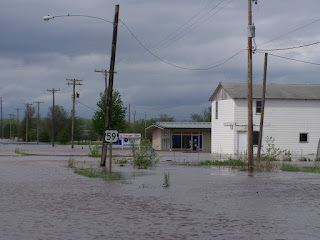 I will be working on adding my next storm account soon!
Posted by cstrunk at 4:51 PM